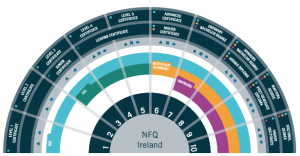 The relevance of this for the APP & TEACH project is important, as the eventual project outputs and their use could well fit within certain criteria or categories in each partner countries’ NFQ framework. The need for the project in general and all project research to date points to the need for training and support, but also a system within apprenticeship frameworks for helping support apprenticeships. but any such system would need to be clear on how it conforms with a National Qualification Framework.

For more on the App & Teach project (including the developed European ECVET Curriculum on Management of Apprenticeship Programs for SMEs), please see https://www.appandteach.com/