The third meeting for the Mifamily Project took place on October 4th & 5th 2018 in Bucharest, Romania. The meeting was focused primarily on the finalisation of the Training content and the development of the online platform and e-learning course. 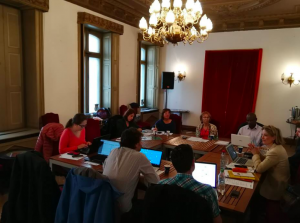 The third Mifamily meeting appears to have been very successful. All respondents provided
positive answers in relation to the meeting in a general sense and in relation to the
organization of the meetingQuantitative information related to the meeting in a general sense was uniformly positive. Partners identified that their expectations for the meeting (relating to the training material, the e-learning platform and an update regarding ongoing activities etc.) were met, that the coordinators were aware of the key decisions to be made and that partners collaborated and contributed to ensure that these were addressed. This corresponds to the respondents’ feelings post-meeting.

As well as the organisation of the meeting from a thematic point of view, from a logistical point of view, partners were uniformly positive about the organization of the meeting – The project meeting agenda/ structure was identified as being clear &amp; effective, that it addressed all the most important elements and that sufficient time and resources had been allocated to
the items in the project meeting agenda. Qualitative feedback identified Icar as having facilitated the meeting very well.